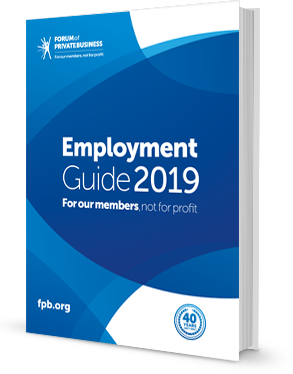 We keep you up to date with the latest Employment Law Legislation and Developments, including proposed future changes and beyond.

The Forum of Private Business Limited has taken every possible care to ensure that the information contained in our guides is accurate at the time of going to print, and the publishers of our guides cannot accept any liability for errors or omissions.  This is why we endeavour to keep our members up to date via our website and email communication.

The Parental Bereavement Leave and pay Act 2018 has now been passed by royal assent. It is expected to come into force in 2020 and will give all employed parents the right to 2 weeks leave if they lose a child under the age of 18, or suffer from a stillbirth from 24 weeks or pregnancy. Parents will also be able to claim to pay for this period, subject to meeting eligibility criteria.

Regulations made under the Companies Act 2006 require UK listed companies with more than 250 UK employees to report annually on the pay gap between their chief executive and their average UK worker. First reports are due in 2020.

Important changes to the Employment Rights Act 1996, affecting pay slip information which will come into force on the 6th April.

1. Employers must include the total number of hours worked where the pay varies according to the hours worked, for example under variable hours or zero hours contracts.
2. Payslips must be given to ‘workers’ as well as employees.

Brexit – the UK leaves the EU

Employer class 1A national insurance contributions will now be payable on that element of termination payments above £30,000. This changes was originally due to take effect on the 6th April 2018 but was delayed one year due to the implementation of the NIC Bill

Harmonises the law on the protection of trade secrets amongst the EU Member States to protect against illegal acquisitions, use or disclosure

The maximum compensatory award for unfair dismissal increases to £83,682 (from £80,541) where the effective date of termination is on or after 6th April 2018.

The maximum for a week’s pay (use to calculate statutory redundancy payments) will increase to £508 per week (from £489 per week). This increase is of particular relevance to those making redundancies on or after the 6th April 2018.

Childcare voucher salary-sacrifice schemes were due to close on the 5th April 201 but the Government has delayed for 6 months following a vote in Parliament.  The abolition is among changes to be made as part of the rollout of universal credit. The Employer backed vouchers are to be replaced by a new system of tax-free childcare, entitling families to claim up to £2,000 per child.

These hourly rates are for the National Living Wage and National Minimum wage.  The rates change every April.

Statutory maternity pay (SMP), paternity (SSP), adoption (SAP) and shared parental pay (ShPP) will rise from £140.98 to £145.18 rose. Usually, the rate is increased from the 1st April but the statement to Parliament announcing the new figures suggested the date this year would be 9th April 2018

More information can be found at proposed benefit and pension rates 2018 to 2019.

The General Data Protection Regulation (GDPR) applies to all EU Member States, including the UK, from 25 May 2018.

The GDPR strengthens existing data protection rules through a number of measures, including:

Breaches of the GDPR may lead to fines of up to 20 million Euros or 4% of global turnover, whichever is the greater. Enforcement of the new rules rests with the Information Commissioner’s Office (ICO).

On 13 September 2017, the government introduced a new Data Protection Bill which will:

The ICO recommends reading the GDPR alongside the Data Protection Bill, because of the regulation has a direct effect in the UK while the Bill pulls in matters not covered by the regulation.

Grandparental LeaveIn March 2016, the government confirmed plans to extend shared parental leave to allow working grandparents to take time off to care for their grandchildren by 2018. A consultation was planned but did not take place and we are now awaiting the government’s decision to indicate whether they intend to pursue the policy.  There is still no progress since it was first announced in October 2015 – it is now unknown as to when this will come into force.

Private and voluntary sectors in England, Wales and Scotland with at least 250 employees will be required to publish information about the differences in pay between men and women in their workforce, based on a pay bill ‘snapshot’ date of the 5th April 2017, under the Equality Act 2010 (Gender Pay Gap Information) Regulations 2017. The first reports must be published on the 4th April 2018.

Similar reporting requirements apply to larger public sector employees from the 31st March 2017 and the first reports are due by the 30th March 2018.

Provisions under the Northern Irish Employment Act 2016 mirror these, except they also include fines of up to £5,000 for non-compliance and a requirement to report on ethnicity and disability pay gaps, as well as gender.

The Equality and Human Rights Commission has launched a consultation that closed on the 2nd February 2018, on proposals to enforce the reporting requirements of the above.

The government plans to make changes to the taxation of termination payments from April 2018. The proposals include:

The Government consultation on the above issue closed in October 2016

The government plans to introduce a further deterrent to the employment of illegal workers. From April 2018, employers will not be able to claim the Employment Allowance for one year if they have:

The government have announced the removal of the Fit for Work assessment scheme in December 2017. Launched three years previously, the scheme consisted of a free information service providing advice on health, work and managing sickness absence – and free occupational health assessment service for employees who had reached or were likely to reach, four weeks of sickness absence. Most referrals were expected to be made by GP’s, but employers were also able to refer employees off sick for more than four weeks. Employers, employees and GP’s will still be able to use the Fit for Work helpline, website and web chat service, but the assessment service will be closed in England and Wales on the 31st March 2018.  Scotland will close on the 31st May 2018.
The closure, announced alongside a 10-year strategy paper for getting more disabled people into work called improving lives: the future of work, health and disability, is attributed to a low referral rate.

Scottish MP Chris Stephens has introduced a Workers (Definition and Rights) Bill under the private members’ 10-minute rules in Parliament. The Bill would ban zero hours contracts, except where their use was agreed with the individual’s trade union and clarify the definition of ‘worker’ in the light of recent case law from the Supreme Court.

Private Members Bills usually need the backing of the government to become law.

All private and voluntary sector employers in England, Wales and Scotland with at least 250 employees are required to publish information annually about the differences in pay between men  and women in their workforces under new Equality Act 2010 regulations, that came into force on the 6th April 2017. The information must be based on a snapshot of their pay bill on the 5th April 2017, and annually thereafter, and the first reports must be published on the 4th April 2018.

Similar reporting requirements apply to larger public sector employers, although these regulations are in force from the 31st March 2017 and the first reports are due by the 30th March 2018.

Regulations under the Northern Irish Employment Act 2016 are due by the end of June 2017, but there is no date yet for enforcement. Unlike the rules for England, this statute provides for fines of up to £5,000 for non-compliance and includes a requirement for the pay bands statistics to cover ethnicity and disability as well as gender.

6th April 2017: Apprenticeship LevyAn Apprenticeship levy applied from the 6th April 2017 to public and private employers with an annual pay bill for the previous tax year in excess of £3 million. All employers in this category, whether or not they actually use apprentices, will have to contribute 0.5% if their annual pay bill, calculated on the basis of all payments to employees (including wages, bonuses and commission) that are subject to employer class 1 NICs. Levied employers with apprenticeships will receive an annual allowance of £15,000 to offset against their apprentice costs.

Organisations sponsoring non-EEA skilled workers under Tier 2 of the points-based system will pay a £1,000 immigration skills charge (£364 for smaller organisations and charities) per sponsored worker from 6th April 2017 (see the draft regulations). The charge was recommended by the Migration Advisory Committee and confirmed by the Government in March 2016. Workers in PhD-level occupations, those switching from Tier 4 Student Visas, and graduate trainees on Intra-company Transfer visas are exempt.

Also on this date:

For more details on immigration issues, you can refer to Employing overseas workers in the UK or refer to the Forum of Private Business Employment Guide Section 1 (member only)

,/span>IR35 tax rules governing off-payroll working in the public sector changed on the 6th April 2017. Responsibility for deciding where the rules apply shifts from the worker to the public body, which will also be responsible for deducting relevant tax and NICs from the fee it pays to the intermediary organisation where appropriate.

For more details on IR35 changes, you can refer to Gov.uk

From the 6th April 2017, only employer pension contributions, childcare benefits, cycle to work schemes and ultra low emission company cars can be provided through salary sacrifice arrangements. Schemes that were in place prior to the 6th April 2017 can continue to benefit from the tax advantages they provide until April 2018.  Accommodation, school fees and other company cars may be provided under salary sacrifice arrangements until April 2021.

For more details on Salary Sacrifice Schemes, you can refer to the Forum of Private Business Employment Guide section 2 and 3 (member only)

A prescribed person, the official organisations to who whistleblowers can disclose wrongdoing under the whistleblowing protection legislation, will be required from this date to make annual reports of those disclosures. The first reports are due on the 1st October 2018

For more details on Whistleblowing, you can refer to the Forum of Private Business Employment Guide Section 6 (member only)

The following NLW and NMW hourly rates applied from the 1st April 2017:

All changes to NLW and NMW rates will now take place ever April.

The Trade Union Act 2016 came into force on the 1st March 2017 and sets out additional strike balloting for those working in important public services. For strikes in those services to be lawful, not only must 50% of those eligible to vote to participate in the ballot, but 40% must support the action proposed (as opposed to a simple majority of those voting, as required in strike ballots elsewhere).

Five sets of regulations specify the categories of public service workers covered by the additional 40% threshold and they are:

Regulations on nuclear decommissioning services are to be produced at a later date.