Here at the Forum we are pleased to see the new government making a great many announcements about spending on infrastructure as well as supporting small and micro businesses across the UK. In a spirit of partnership here are a few of the items we would like to see addressed in the budget by the new chancellor Rishi Sunak.

Brexit
We are now moving forward on leaving the EU and forming a new partnership as we move into the unknown, it is vitally important that government not only tells business what’s going on but how it will affect them, one size fits all statements will not do! Big business has the time and resources to be able to decipher government announcements, smaller businesses do not. So they need clear guidance as to what’s happening, what it means to them and what action if any they should be taking! There also needs to be an open channel for feedback so that if small and micro businesses find opportunities or issues this can be fed back quickly and acted upon.

Business rates
For far too long business rates have been causing problems for small businesses, they prevent growth and expansion and are not a fair tax, a thorough review of Business rates and alternative or alternatives to it, need to be found.

Connectivity
True digital connectivity particularly to rural areas needs to be addressed and investment in this infrastructure needs to be raised, working with the private sector the government needs to make sure we are able to be a true digital economy and no one should be disadvantaged because of where they live.

Transport connectivity is important particularly in the North and we are going to see a lot of long-term investment in projects that we won’t see the benefits of for a long time, particularly the rail network. But in the shorter term some spending on key roads would be good. We have seen potholes on motorways, smart motorways being set up causing huge delays and they don’t seem to be safe and so the travelling times particularly from Birmingham to Manchester and Liverpool, Manchester and Liverpool to Leeds and Hull, getting around Manchester and the journey to the North East are a lottery. So, get some investment into the M62, M6, M60 and the A1, as well as a good link from Exeter into Cornwall.

Late Payment
The government needs to keep pushing all companies to pay on time, it’s a cultural change and it needs government help, with that in mind the government have announced all this infrastructure spending. The main beneficiary of the HS2 work seems to be Balfour Beatty who were removed from the prompt payment code for late payment of suppliers. One can only hope the Chancellor and Government used their buying power to ensure all the contractors on these jobs are adhering to the prompt payment code, with penalties if they do not.

Let’s see the new small business commissioner being given more powers. So put the prompt payment code under his control, give him power to investigate and give him power to fine and penalise continual and unrepentant late payers.

Regulation
Our tax code is too complex and open to abuse by powerful companies with huge resources, it needs a thorough review and overhaul, it’s a big project that has been avoided for too long, all small and micro businesses want is a fair and level playing field and that currently does not exist. So, set up a task force with real power and a timescale in which to deliver real results.

Education and skills
We need more government investment to help people retrain throughout their life, change is ever more rapid, driven by technology, education and training at the start of your business career is not enough. People need to be able to evolve and change along with business and that means having readily accessible training throughout your life, whole life learning. That means having courses close to where people are, delivered at a time of day when they can access it and it needs to be affordable. While we are at it, we should be teaching about change, creativity and innovation at school level, so we prepare our future workforce for ever faster change and how we can deal with it.

Rebalancing the economy
Let’s see some real investment in moving government departments and civil servants out of the Westminster bubble and out into the regions, it worked magnificently with the BBC relocating to Media city in Salford, lets see some more brave moves announced by the chancellor. One of the benefits may be that ministers and civil servants start talking to business directly rather than through the same lobbying groups all the time.

Listen to the podast 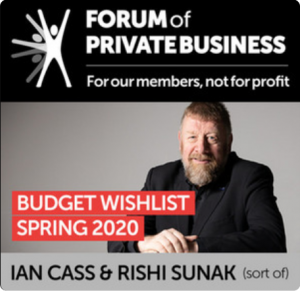